The center of early-day family entertainment, the old Camp Verde Dance Hall was a porch-less, one-and-a-half story, wood framed building with a concrete foundation and few windows. The arched roof is a notable and unusual feature along Camp Verde’s Main Street. Fred Stephens and Bill Verden built the hall for Russ Mulholland circa 1910-1920. Tom Goswick ran the dance hall in the 1920s, and the building served as home to the ‘slipper-slide and wiggle-tail glide’ on Saturday nights for a decade after its construction.

The dance hall was converted into a roller skating rink in 1930, and afterward was transformed again into a small Bechetti Theater that showed the latest monochrome movies. Later, the building was repurposed as a feed store, saddlery, and finally as a grocery and liquor store. It continues to serve as a home for several locally owned Camp Verde businesses. 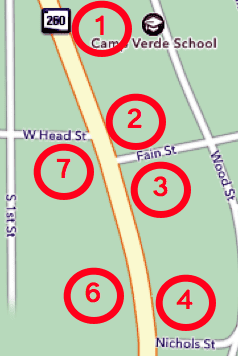