William Stanford Head was a central figure during Camp Verde’s founding years. Head acquired the nickname “Boss” after the way he bullied the territorial legislature after his appointment in the late 1870s. In 1870, Head purchased the sutler business from Wales Arnold and Hugh Richards, and began constructing the adobe Sutler’s Store (Stop 6) in 1871. Head & Co. controlled a sizeable portion of Yavapai County’s early commerce, and bid for contracts to supply wood, hay, and grain to Camp Verde and Fort Whipple (Prescott).

The Head House is architecturally significant as an excellent example of vernacular construction and as Camp Verde’s oldest surviving civilian-built structure. While the builder is unknown, it may have been Edwin Nurser/Nursey, a local master stonemason who built the Clear Creek Church and the Henry Wingfield House. The Head House is constructed of locally quarried ashlar limestone with sandstone lintels. The house has a central stairwell, four-inch tongue-and-groove flooring, bulls-eye molding on the interior window and door trim, and a stained glass transom over the five-panel front door.

The Head House remains a private residence; visitation is not permitted. 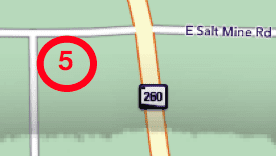